Facts You May Not Have Known About X-Rays 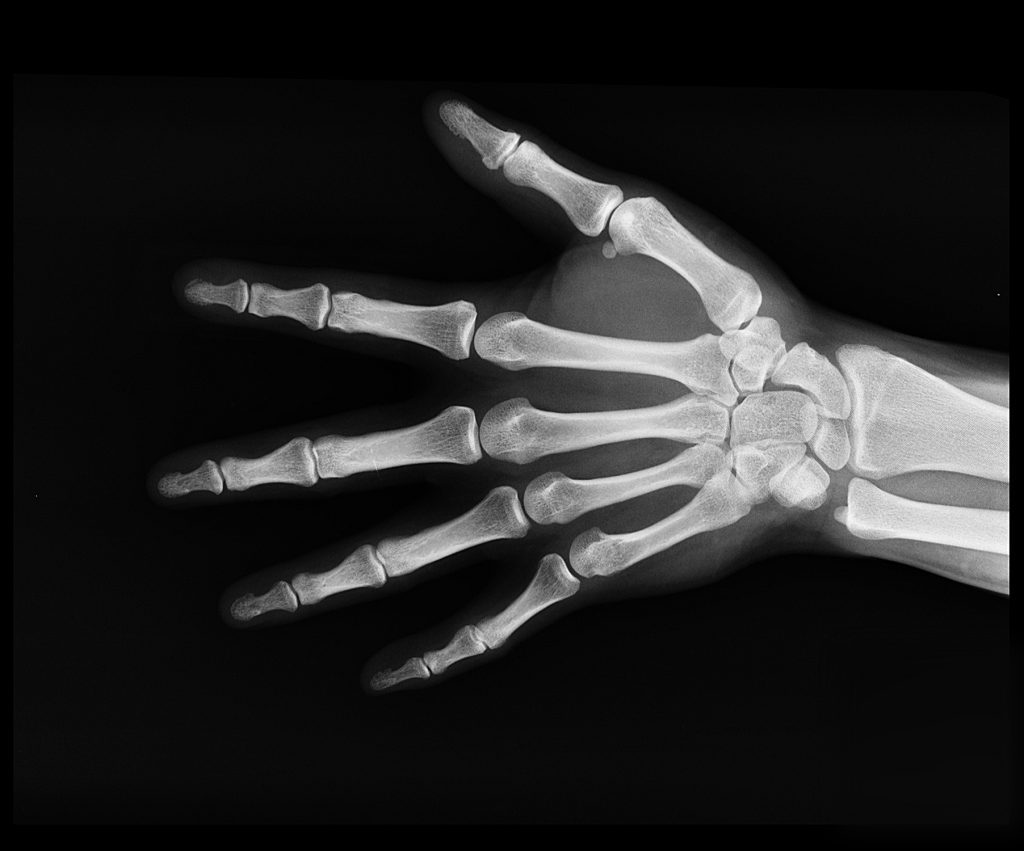 An X-ray is a painless medical test that uses a type of high energy electromagnetic radiation. When people think of x-ray s, they typically think about bones. However, when you take a closer look at the scan, you see there is a lot more than meets the eye. X-rays have been used for identifying fractured or broken bones, disease, and even to allow security personnel to find hidden weapons on people as they pass through security check points. Here are some facts you may not have known about x-rays.

In 1895, Wilhelm Roentgen, a physics professor in Bavaria, was the first to discover a way to peer inside the body without surgery. He was experimenting with the conduction of electricity through low-pressure gasses with an induction coil and vacuum tubes when he accidentally discovered a ray capable of lighting up a fluorescent screen a few meters away. After passing his hand between the ray and the screen, he saw a shadow of his own bones. After further experimentation, the screen was replaced with a photographic plate and the X ray was born. In order to protect the photographic plates, he used a zinc and lead box while taking x-rays. He was unaware that this protected him as well. Too much exposure to X-rays can cause cancer. One of his first x-rays was of his wife’s hand with her wedding ring on. After seeing the image of her hand she said “I have seen my death.” Roentgen would later earn the Nobel Peace Prize in physics for his discovery.

In German, x-ray, or x-strahlen, translates to “unknown beam or ray.”  The “x” is used in mathematics to indicate an unknown quantity. It was a fitting name because it was initially a mystery on how it would be used. Even though we now know how x-rays work, the name is still used. The rays have also been called “Roentgen’s rays,” and the images they produce are sometimes known as “roentgenograms.”

3.  X-Rays Were Thought to be Harmless

In the early days, x-rays were thought to have passed through the body as harmlessly as normal light. In fact, there was a late 19th century/early 20th century vogue for x-ray machines to be used in carnivals and theatrical shows. They were even a promotional gimmick for products like headache tablets and stove polish. However, their harmlessness was proved wrong when Clarence Dally, who spent a number of years working on Thomas Edison’s X-ray light bulb, died of skin cancer. Over time his hair fell out and his skin developed lesions. While Edison canceled the bulb, Dally continued working with X-rays. Burns on his hands became cancerous, and he had both of his arms amputated before he died. That being said, x-rays were still used in past the turn of the century. In the 1920’s, men and women sought x-rays to remove unwanted hair. This was later banned by the FDA in the 1940’s after many previous patients developed cancers. During the 1930s, ’40s, and early ’50s, x-ray machines were also a feature of American shoe stores, which used them to ensure a better fit.

4.  There are various types of X-rays and uses.

There are two variations of X-rays: “soft” and “hard.” Hard X-rays are used in the imaging of humans and solid objects because they carry more energy to pass through dense objects. Soft x-rays are easily absorbed and won’t span more than a millionth of a meter of water. When using x-rays, there are various types. Mammograms are fixed plate x-rays that are used to locate tumors within the breasts. CT scans also use fixed plate x-rays, but the x-ray tube rotates around the individual to great a two-dimensional cross section of the body. Dental x-rays locate decay within the teeth. When looking at the internal organs, sometimes a liquid contrast dye is ingested. The contrast material absorbs x-rays, making soft material more easily visible. Fluoroscopy is an x-ray technique that produces real time images. Contrast material is injected into a blood vessel and the physician can watch the movement of the material to determine if there are blockages in circulation. Fluoroscopy is also used to guide catheters into place in the heart or to guide an endoscope during endoscopic surgery. Other common imaging techniques such as magnetic resonance imaging (MRI) and ultrasound do not use x rays.

The Earth’s atmosphere is thick enough that virtually no X-rays are able to penetrate from outer space to the Earth’s surface. However, many objects in space emit X-rays. For neutron stars, massive and compact stellar remnants can strip materials from the star resulting in a disk of extremely hot gas. This gas emits x-rays and spirals inward. Other sources of x-rays include the sun, some comets, supernova remnants, and binary star systems. Additionally, supermassive black holes at the center of spiral galaxies will emit x-rays as stars and gas clouds fall within their gravitational reach. Because we can not do x-ray astronomy from the ground, more than a dozen telescopes that detect x-rays have been launches into space. These telescopes have allowed us to make discoveries far beyond our own solar system. One example is the Chandra X-ray Observatory that was deployed aboard the Space Shuttle Columbia in 1999. Since its deployment, the observatory has discovered black holes, advanced our understanding of dark matter, and looked at the huge black hole at the center of the Milky Way, among other achievements.

The Radiologists at Seton Imaging have been serving the Western New York community since 1984 as one of the areas longest established Radiology practices. Our goal is to deliver superior imaging services. With our skilled and experienced team of radiologists, we work closely with your referring physician to bring you the best in diagnostic imaging services and the highest quality of care. You can always feel free to give us a call at (716) 633-8675 or contact us online with any questions. 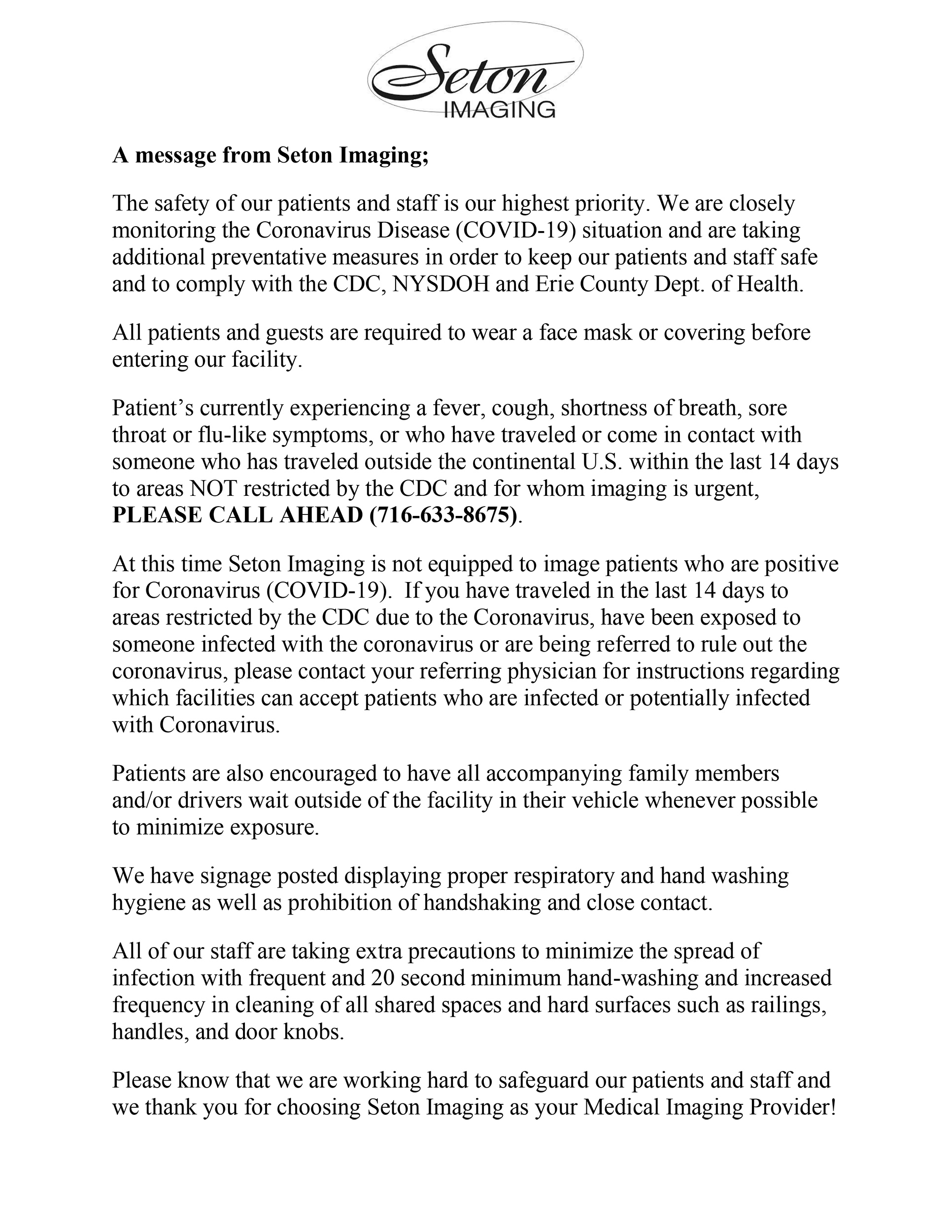